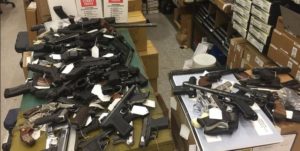 AB420, an excellent piece of legislation, that was supported by a broad, bipartisan coalition that included Nevada Policy, the ACLU, public defenders and others. This commonsense reform passed the Assembly by a landslide 34-6 margin, with all Democrats and half of the Republicans voting to pass AB420, and reform civil asset forfeiture in Nevada.

Government had no need to fear, however, as they had one of their own controlling the Senate: Majority Leader Nicole Cannizzaro. Cannizzaro, and her Senate colleague Melanie Scheible, are both Clark County prosecutors who work alongside the very law enforcement agencies who directly profit from the current forfeiture system. Unsurprisingly, they fiercely opposed the bill and chose to simply let it die without ever bringing it to a vote.

My name is Daniel Honchariw. I represent the Nevada Policy Research Institute as its senior policy analyst and registered lobbyist.

NPRI enthusiastically supports AB420. For too long, forfeiture laws have upended the due-process rights of Nevadans, leaving a wake of destruction in their path.

This bill fixes that in two critical ways. First, it requires a conviction in all cases before forfeiture can apply. Second, it redirects the bulk of proceeds generated by forfeited property towards state education funding, rather than law enforcement, which effectively eliminates the “policing for profit” incentive that currently exists.

This bill also provides protection for marginalized communities, which are disproportionately impacted by forfeiture. I’ve submitted into the record a copy of my report from 2017, which shows that the people most likely to be impacted by forfeiture’s abuses are also those who are least likely to be able to contest the forfeiture in court, for financial and other reasons. Such victims essentially have no practical recourse for getting their property back, even if they are completely innocent of any offense.

I applaud Chairman Yeager and this committee for bringing forth this legislation and encourage its swift passage for the advancement of Nevadans’ civil rights.