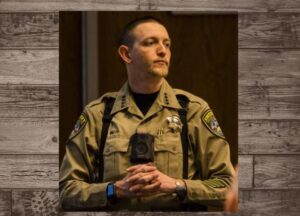 In 2019, Eureka County Sheriff Jesse Watts led the way in opposing the unconstitutional gun laws passed by the Democrat dominated Nevada legislature and Gov. Sisolak. Now Sheriff Watts is taking on Sisolak again, this time challenging his authority to ban churches and gatherings. To date, Eureka County has seen zero cases of Covid 19.

In May a local citizen filed a police report about a group of folks gathering at a local outdoor party at a church. Sheriff Watts responded

“This week, ECSO (Eureka Sheriff’s Office) has received two complaints about people gathering and not social distancing. These are NOT an emergency or a matter that ECSO Deputies will be responding to. These complaints were due to 15-20 people celebrating a birthday party, and today, a church hosting an outdoor church service. The constitution of the United States allows us the Freedom to Assemble, and the Freedom of Religion. No emergency declaration that’s been signed can take those god given rights away from us.”

“The constitution of the United States allows us the Freedom to Assemble, and the Freedom of Religion. No emergency declaration that’s been signed can take those god given rights away from us. I spoke at UNR in February, and I talked about how the protection of those rights are up to each of us. People choosing to excursive their rights to assemble is their step of protecting these rights. From birthday parties to church services, these are the rights of the American people, and just because you don’t like what they’re doing, doesn’t mean you’re right. You have a choice to stay home, just as they have the right to assemble. In closing, it is my stance, that the men and women of the ECSO will not be taking enforcement action on any of Governor Sisolak’s “Orders” that clearly violate our constitutional rights.”

Watts was one the first Sheriff in Nevada who sent an open letter to Gov. Sisolak stating he would not enforce the new gun laws he had just passed. Since then the state has harassed him and his department with phony inquiries and threats of investigations. No word form other county sheriffs is they are if also refusing to enforce Sisolak’s Emergency orders.

A law suit was filed in December but seems to be on hold due to CV19. 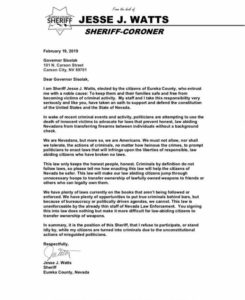