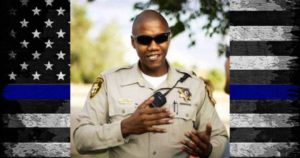 Today Las Vegas Metro Officer Charleston Hartfield killed October 1, 2017, at the Route 91 Vegas Mass Shooting, will be laid to rest in an official police procession and with full department honors. Officer Hartfield was an Army veteran who served in Iraq.

He is survived by his wife, Veronica, son, Ayzayah, and daughter, Savannah. He was 34 years old.