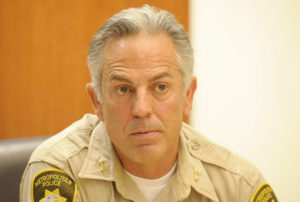 After a record-breaking murder rate for 2016 and 2017, Clark County is off to a terrible start. According to reports, 20 people have been murdered in Clark County so far in 2018.

Since Sheriff Lombardo took office in 2015, crime has surged in all categories especially violent crimes. Sheriff Lombardo is up for re-election this year, but so far no one has stepped up to run against him.