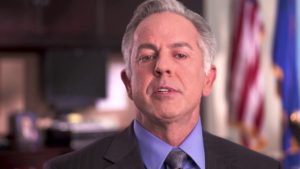 Tonight I attended a small event hosted by the UNLV College Republicans where Sheriff Lombardo was the main speaker.

There are still two items I know that you don’t know. (Referring to everything disclosed to the press about the Vegas Mass Shooting.

“I’m haven’t been treated fairly by the press, not by news organizations, just by individuals (in the press).”

My policy of breaking up the gang and other crime units is working. Violent Crime is up by 7% in the country but only up by 1% here in Clark County.

I’m not getting rich doing this job. I’m way underpaid.

I never understood the power of the press until the Mass Shooting incident, especially all the conspiracy theories.

Afterward, in the hallway, Lombardo and I spoke face to face. Referring to me as “Trouble” I asked him point blank, “Why don’t you think ISIS was behind the Vegas Mass Shooting?” Sheriff Lombardo smiled, looked me right in the eyes and answered: “Believe me. It wasn’t ISIS!”