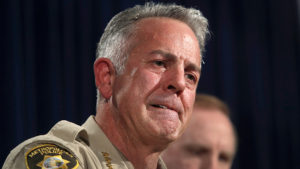 Out of 2,808 officers in the LVPPA, some 2,282 police refused to vote for Lombardo. Lomabrdo only received 526 votes.

According to a letter sent out today to the membership from the LVPPA President, Steven Grammas, no candidate received 51% of the required vote necessary for an endorsement. Only 18% of current Las Vegas Metro Police Officers in the association voted for Lombardo. Four years ago Lombardo was also rejected in favor of Larry Burns.

After four years of surging violent crime to record levels and an exhausted public seeking solutions and answers, the average police officer in LVMPD, who also must live in this city and raise their kids here, made their voice heard today loud and clear with this vote of no confidence in Sheriff Lombardo. 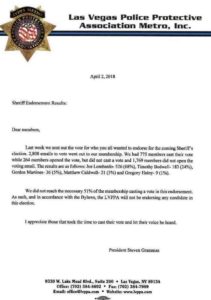