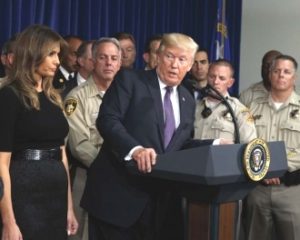 Las Vegas Metro Police accepted funds from the Department of Justice to fund officers in the detention center to identify illegal aliens. There is supposed to be a 48-hour hold on illegal aliens identified for ICE to pick them up, but in many cases, illegal aliens are allowed to post bond and just walk out the jail before the 48 hours are up, according to bail bonds companies we spoke with.

President Trump increased the number of criminal illegal aliens picked up in the Clark County jails in the first year from 28% to 64%. Nothing in the law requires Lombardo to release illegal aliens with an ICE hold within 48 hours. In fact, the U.S. Supreme Court just ruled last month that illegal aliens are not entitled to bail and can be held indefinitely or they can choose to leave the country. Illegal aliens are only held in jail if they choose to fight their deportation orders in court.