Yesterday, NEWSMAXTV LAS VEGAS posted a video about the battle raging today in the world between Trump nationalist forces and Global Elites bent on redistributing populations in an effort to change the US and world political order. Our Facebook post drew the following response from local Clark County School Teacher Richard Oven AKA liberal nut job, ” I like to think of the world as being just one loving and sharing nation with the golden rule being the main theme.”

Innocent enough, perhaps idealistic and naive. But then we saw this statement from our loving school teacher, praising the recent protests (riots) as “wonderful”. And then he goes on to state “We must make corporations, regressive religions, racists, bigots, and the uneducated shake in their boots.”  I thought it was his job to teach the “uneducated”? 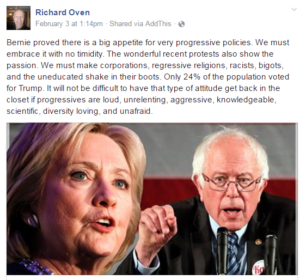 Again this guy is teaching our young children in our public schools. This guy wants to invoke fear in Trump supports and anyone who disagrees with him through aggression and protests.