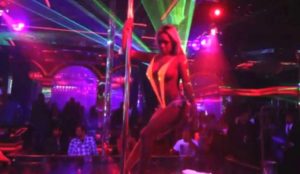 Two years ago, when President Obama landed in Havana to officially open ties with Cuba, many never thought it would lead to an unprecedented number of young women fleeing to the U.S. and filling the stages of Vegas strip clubs.

But that is what happened. Two years later, a large portion of Vegas strip club talent are Cubans who recently fled the Communist nation’s poverty for a better life. Obama opened the door to Cubans to immigrate to the U.S. Trump has since closed the door. Many are in their early twenties and are happy to have a chance at a good life. Making up to a $1k a night has attracted many Cuban girls to the easy money and for them, its paradise compared to living under Castro’s iron grip. But a lack of marketable skills, besides being young and beautiful, makes stripping an easy path to economic freedom in Las Vegas for many of them. And many of them are the main breadwinner in their families living here with them.

While some here in the U.S. may see them as being exploited, they see stripping as an opportunity to build a better life in a foreign land. Time will tell if their dream becomes a nightmare or leads to financial independence.  But as with all strippers, eventually, they will get too old to strip and will have to find another line of work. So look for a rush at real estate and beauty schools in about ten years.