This week, former CIA Chief John Brennan wined on every cable news outlet that would let him on about how mean President Trump is for pulling his security clearance. This is same CIA Chief who lied to Congress on at least two occasions (cf. his denial of CIA surveillance of Senate staffer computers), and (his denial of knowledge of the Steele dossier among government agencies). The same CIA Chief who pulled Benghazi hero Kris Pronto’s security clearance after then Secretary of State Hillary Clinton left him and his security detail to die without back up.

Kris Pronto and the other survivors became house hold names in 2012 when they spoke out publicly about how Hillary Clinton and the U.S. Government left them to die without back up while under fire for over 13 hours costing the lives of U.S. Ambassador Christopher Stevens and USFS officer Sean Smith, CIA contractors Tyrone S. Woods and Glen Doherty.

Pronto’s story of survival in Benghazi under attack by local Muslim terrorists and left to die by Hillary Clinton and the state Department, inspired the movie 13 Hours.

So this week Kris Pronto spoke out again against his former boss, former CIA Director John Brennan in a tweet. Pronto went on to say “Waking up with my blood still boiling when I think of our security clearances being stripped away when we were doing the right thing…” 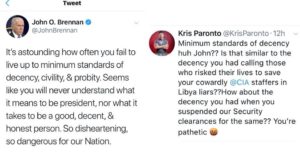