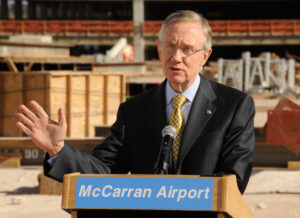 The intellectually dishonest, Nevada Democrat controlled media is turning a blind eye to Harry Reid’s past racist comments as he steals the legacy of Nevada legend, Sen. Pat McCarren.

In today’s cancel woke culture only a Democrat can get away with making racist comments and have all the media continue to support naming one of the biggest airports in the world after him. Every Democrat, every media outlet, every woke warrior, every cancel culture social media snowflake just lost any credibility they thought they had after support changing McCarran Airport name to Harry Reid.

Harry Reid’s history includes racist comments about Obama, Asians and Hispanics. Harry Reid was opposed to illegal immigration before he was against it.