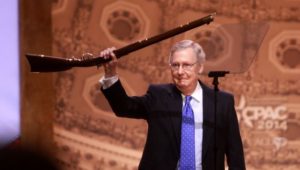 Today, Republican Senate Majority Leader Mitch McConnell said he is willing to bring gun control bills to the floor of the Senate for a vote if President Trump is willing to sign the bill. President Trump said he would support Universal Background Checks and red flag laws right after the El Paso mass shooting but has since backed away from that.

With the NRA in shambles and soccer moms wanting some kind of action after the numerous mass high profile mass shootings this year, McConnell and the President seem stuck. They both want to convey their support for more gun control to appease soccer moms without actually taking any action that would must certainly lead to their political demise next year. If McConnell passes any gun control laws it would be most certainly require the President to sign it. There would be absolutely no room for the necessary votes to make any such bill veto proof.

That means if President Trump were to sign any kind of gun control law or laws, he would almost certainly loss a significant number of voters who would stay home next year and possibly cause him to lose the election. So both men want to say the words on the record without actually doing anything.

But this is an opportunity for our Republican leaders to educate the public and fight for our ideas. These are the times when the courage of our leaders should shine through the noise of the fake news left. The fact is not one of the mass shootings in the last 10 years would have been stopped by so called Universal Background Checks, not one. And background checks cannot work without a “Gun Registry.”

Republicans are worried because McConnell is a spineless RINO who has repeatedly sold out base Republicans over the years when push came to shove. So Republicans are putting their faith and trusting President Trump to hold the line.