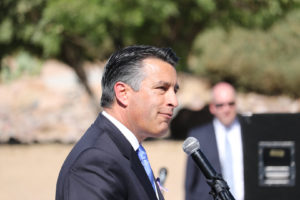 Yesterday in Washington D.C., Gov. Sandoval attended the National Governors Association annual meeting at the Newseum where he spoke out against President Trump’s border wall proposal. President Trump is expected to sign an executive order directing funds to start building a 2,000 mile long wall along the Mexican border to fulfill his campaign pledge.

But Sandoval is urging Trump to break that pledge stating “On my list of things to be done, that wouldn’t be one of them”.

Gov Sandoval supported President Trump after he won the nomination but then withdrew his support when Joe Heck and other moderate Republicans also withdrew their support following a 2006 NBC hot mic recording released three weeks before the general eleciton in which Trump made crude remarks.

Gov. Sandoval also called on President Trump to give states flexibility in how they deal with healthcare issues on the heels of Trump and the Republican Congress striking down the Obamacare law. Sandoval was the first Republican Govenor in the country to embrace and accept the Obamacare limited subsidies leaving a huge whole Nevada’s budget to fill now.