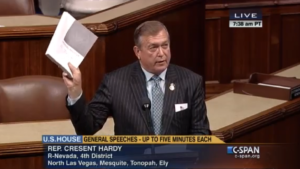 Las Vegas – Today Cresent Hardy officially filed to run for Nevada’s 4th Congressional District, currently held by outgoing Congressman Ruben Kihuen. “I’m ready to get back to work for the 4th Congressional District. I look forward to not only representing the citizens of this great district in Washington D.C., but also continuing my commitment to having the most effective and engaged constituent services operation in the country,” said former Congressman Cresent Hardy. “Now, more than ever, Nevada needs proven leadership in Washington, and I’m the only candidate in this race who is ready to get to work for the 4th District on day one.”

Cresent Hardy lost to Congressman Ruben Kihuen in 2016, who is stepping down after several women came forward accusing him of sexual misconduct.

Cresent Hardy has served as the Mesquite Public Works Director, as a member of the Virgin Valley Water District, on the Mesquite City Council, and two terms in the Nevada Assembly before being elected to Nevada’s 4th Congressional District in 2014. He lives in Mesquite, Nevada, with his wife Peri; they have four children and five grandchildren.