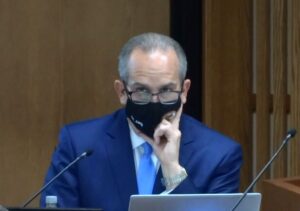 Eldorado High School student, Jonathan Eluterio Martinez Martinez, was charged today as an adult, for raping and strangling a teacher. Today, in a Press conference, CCSD Superintendent Jara and President of the Clark County Educator’s Association called on the Governor and Democrats in the State Legislature to officially end Restorative Justice after an Eldorado Teacher was strangled and raped by a student this week.

Parents and teachers have been extremely critical of the far left polices called Restorative Justice put in place by Democrats in Nevada.

This is CCSD Trustee Board President Irene Cepeda explaining the failed policies 4 years ago in this video that resulted in the surge in on campus violence, including 177 sexual assaults this school year alone. Democrat Socialist Clark County School Trustee Irene Cepeda opposes removing violent black youths from Clark County school campuses because they may become future criminals. Not once did Irene mention other kids victimized by violent undisciplined kids.