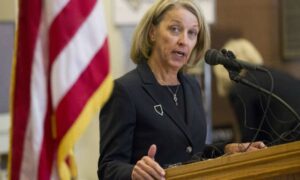 Outgoing Nevada Secretary of State, Barbara Cegavske, was served a subpoena last month as part of the U.S. Department of Justice’s special counsel’s investigation into the 2020 election controversy.

Cegavske was ordered to produce or appear in federal court.

“any and all communications in any form” between June 1, 2020, and Jan. 20, 2021, “to, from, or involving” Trump, his campaign, lawyers, and aides, including former campaign officials and lawyers such as Sidney Powell and former New York Mayor Rudy Giuliani.“

The FBI seized McDonald’s phone before the 2022 midterm elections.

“Out of an abundance of caution, we included communications with the NVGOP and RNC in our search, and that was the only record found during the time frame in question,”