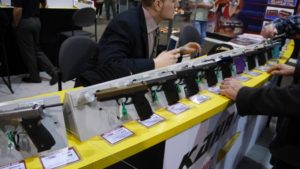 As Reported in USA Today:

WASHINGTON— Federal authorities sought to take back guns from thousands of people the background check system should have blocked from buying weapons because they had criminal records, mental health issues or other problems that would disqualify them.

A USA TODAY review found that the FBI issued more than 4,000 requests last year for agents from the Bureau of Alcohol Tobacco Firearms and Explosives to retrieve guns from prohibited buyers.

It’s the largest number of such retrieval requests in 10 years, according to bureau records – an especially striking statistic after revelations that a breakdown in the background check system allowed a troubled Air Force veteran to buy a rifle later used to kill 26 worshipers at a Texas church last month.

The FBI’s National Instant Criminal Background Check System (NICS) vets millions of gun purchase transactions every year. But the thousands of gun seizure requests highlight persistent problems in a system where analysts must complete background checks within three days of the proposed purchase. If the background check is not complete within the 72-hour time limit, federal law allows the sale to go forward. ATF agents are asked to take back the guns if the FBI later finds these sales should have been denied.

In addition to the public safety risks, the ATF agents tasked with retrieving the banned weapons from unauthorized gun owners across the country are exposed to potentially dangerous confrontations.

The government’s success record when it comes to retrieving guns that were improperly purchased has also been mixed.

The ATF declined to provide information on the 4,170 gun purchases the FBI referred for seizure last year. They reflect a substantial increase from 2,892 requests the previous year.

The FBI said the ATF is not required to report back on the status of the retrieval efforts.

Yet in 2004, the Justice Department’s inspector general found that the ATF’s retrieval efforts were plagued by staffing shortages, technological inefficiencies and a general lack of urgency that resulted in recovery delays of up to a year.

“ATF agents did not consider most of the prohibited persons who had obtained guns to be dangerous and therefore did not consider it a priority to retrieve the firearm promptly,” report concluded.

A separate inspector general’s report last year found marked improvement. Of 125 transactions examined between 2008 and 2014, investigators found that the ATF recovered 116 – or 93% – of the firearms.

Of the nine outstanding cases, five buyers could not be located. Two had already re-sold the firearms. One case was turned over to local authorities. And another was not pursued because the agency “did not have the resources to retrieve the firearm,” the report found.