DOES THIS TV COMMERCIAL ABOUT CHRIS EDWARDS GO TOO FAR?

“AN ACT relating to animals; requiring certain research facilities to

offer certain dogs and cats to an animal shelter or rescue

organization for adoption before euthanizing or destroying

such a dog or cat; and providing other matters properly 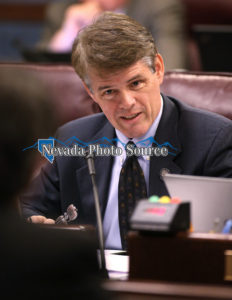 According to the facts, Chris Edwards was the only person in both the Nevada Assembly and the Senate to vote no which would have indeed resulted in the dogs being euthanized according the bill’s text. As a result, many of the dogs were adopted and found forever homes.

Senator Mark Manendo, the bill’s sponsor said “We wanted to put forth that bill, making sure that those dogs have an opportunity to live after they’ve sacrificed their bodies for science.”

NEWSMAXTV LAS VEGAS is waiting for Assemblyman Chris Edward to respond to the article and we will update you when we get it.

Send your comments to: [email protected]