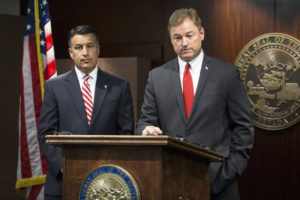 Yesterday, Conservative radio talk show star, Heidi Harris, explored rumors about Gov. Sandoval angling for Heller’s seat. Heller went on the record a couple of weeks ago, at Sandoval’s insistence, to support his Medicaid expansion here in Nevada and oppose the Obamacare repeal bill in the Congress.

Heller and Sandoval did a joint press conference in which Heller said he opposed any Obamacare Repeal Bill that cuts the rate of growth of Medicaid. Under the House Bill, Medicaid would go up around 3% a year, but Heller wants Medicaid to double over the next ten years as prescribed in Obamacare. Any cut in the rate of growth is a cut in Washington D.C. talk. Sandoval was the only Republican Governor in the country to expand Medicaid following the passage of Obamacare.

Heller could have claimed he opposed Obamacare because it failed to fully repeal Obamacare and his base would have applauded and fully supported him, but because he said he opposed it because it failed to double Medicaid, a government welfare handout, his base hates his guts now. Heller was more worried about Sandoval than about his base. And Sandoval may have set him up to crash and burn so he could swoop in and take his seat.

In recent polls published by the Hill, only 5% of Nevadans think Heller has done a good or excellent job. Only 21% of his base supports him today and he is currently loosing to Jakey Rosen by 4 points. All this may give Sandoval an opening with his donors to swoop in and push Heller aside. Sandoval is termed out as Governor next year and is looking for his next gig. Sandoval is extremely popular with Democrats and Moderate (RINO) Republicans which could be all he needs to win the election.

Yesterday, Heller voted against repealing Obamacare in the Senate. He is boxed in now between a base who despises him and Democrats who wouldn’t vote for him if he supported the entire DNC platform.

So keep your eyes on Sandoval’s moves over the next few months. His supporters are waiting to see what he does next. 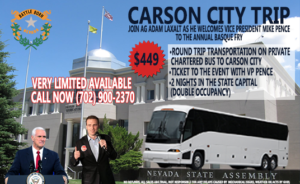