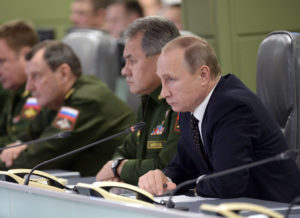 Today, one day after President Trump launched over 59,000 pounds of explosives with some 59 cruise missiles at a Syrian Airbase over an alleged chemical weapons attack by the Assad Regime that killed some 80 men, women and children, Russian President Vladimir Putin is condemning the attack as illegal.

President Putin of Russia said the missile attack by the U.S. was an “act of aggression against a sovereign country” that harms U.S.-Russian relations as well as the goal of fighting international terrorism, his spokesman said Friday. In addition Putin said through his spokesmen “violating the norms of international law, and under a trumped-up pretext at that.”

So the question is, did the Syrian Strike destroy the left’s narrative that Trump and Putin may have worked together to hack the general eleciton in 2016? President Trump’s actions were a clear message here in the U.S. that he is independent and has no allegiance to President Putin and that Trump will act in the interest of the U.S. first and foremost.