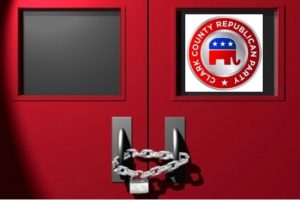 The Clark County Republican Party failed to raise a single dollar according to their October 16, 2018 and November 2, 2018 C&E reports under Carl Bounce’s leadership. And to date, the CCRP raised a total of $7,300, of which $1,200 was in-kind donations. Compare that to 2014 when Republicans swept the midterm elections, they raised more than $161,000. The CCRP rose over $82,000 in 2013 with no state or national elections. The CCRP has become a dysfunctional social club with dwindling numbers of average people attending a clearly irrelevant organization. The time is now to take the fight to the Dems by scrapping all those like Carl Bounce who wasted our time and votes and build a new machine. If Carl didn’t want to do the job he should have resigned back in May.

By comparison, the Clark County Democratic Party raised over $49,000 to date. Why the focus? Because Clark County produces over 70% of all statewide votes with a population of over 2.7 million out of a total of 3 million people living in Nevada. The county parties are a critical part of the electoral machinery helping candidates with phone banks, cash and GOTV (get out the vote). Yesterday I called the CCRP phone number listed on the website to see if anyone would answer on election day. NO ONE answered or called back.

The CCRP broke and out of money put Republican candidates at a distinct disadvantage verses Dems who had $49,000 to pay for walkers and GOTV. The Clark County Democrats had TEN campaign offices across Clark County where volunteers could make calls, canvass local neighborhoods and organize in support of their candidates.

There is no path to victory for Nevada Republicans without a fine tuned Clark County GOP machine. It’s time for professional, full time political operatives to run the County party and rebuild the machinery. We have two year to get it right.Lets start by electing serious professional people. 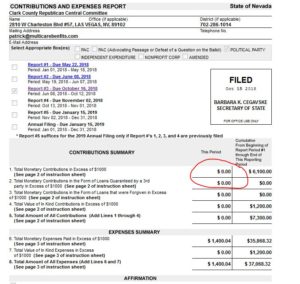