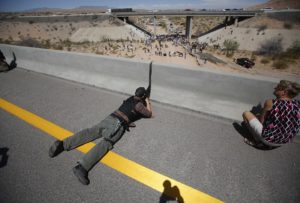 The trial ended this week without the Bundy supporters’ defense attorneys giving closing arguments. According to people watching the trial of the Bundy protesters, U.S. Federal District Judge Gloria Navarro shut down any kind of defense of their actions.

Navarro barred references to constitutional rights including the 1st and 2nd amendments. Navarro also prohibited the defense from even mentioning alleged misconduct or excessive force by law enforcement.

Eric Parker, who was photographed in April 2014 pointing a rifle on a bridge at federal BLM officers, was thrown off the witness stand half way through his testimony. Other defendants, Steven Stewart and Ricky Lovelien, did not even bother testifying.

This is a retrial after a jury deadlocked last year in the first trial.

Four men are on trial for driving to Bunkerville in support of rancher Cliven Bundy, who prosecutors allege conspired to thwart the federal government’s roundup of about a 1,000 cows from Bunkerville. The Bundy’s argued that their family had grazed that land for over one hundred years and the federal government had no right to levy grazing fees. But the courts denied their arguments several times over the past ten years.

According to trial court witnesses, the Prosecutor was not limited from talking about any topics including FBI witnesses who posed as reporters in order to get incriminating comments from the Bundy’s and their supporters. 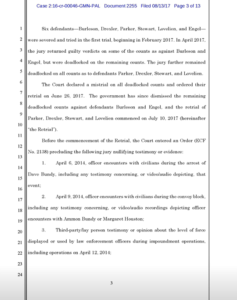 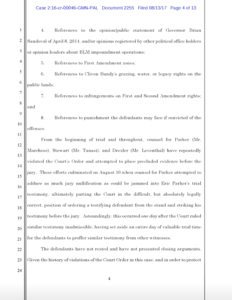