AFTER SEVERAL HIGH PROFILE KILLINGS OF STORE CLERKS IN VEGAS WAS SUNNA JUSTIFIED?

AFTER SEVERAL HIGH PROFILE KILLINGS OF STORE CLERKS IN VEGAS WAS SUNNA JUSTIFIED? 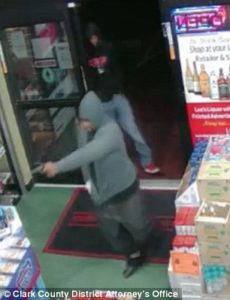 In April of this year, a Lee’s Liquor store clerk was shot and killed by robbers. He was shot several times according to police and later died at the hospital.

Last year a store clerk was shot and killed by a robber at a Walgreens in the valley. And just last month an armed serial robber was shot and killed at a Seven Eleven store. So far this year Clark County has experienced 158 homicides, the highest level since 2006.

Las Vegas Metro arrested Lucky Cigars and Smokes store clerk Raad Sunna, 24, on MURDER charges for shooting and killing Fabricco Patti,13, who was robbing his store along with 2 other boys, all of whom were wearing masks. Sunna shot and killed him in the course of the robbery claiming self defense.

However, Metro Homicide detectives arrested Sunna Tuesday after viewing the store video Monday. The police said they do not believe Sunna was in imminent danger and so the shooting was not justified. Metro Homicide Lt. Dan McGrath said Sunna was one of the people who called 911 and was “hysterical” after shooting Patti. According to McGrath, after bursting into the store, the teens turned toward the retail displays and began grabbing merchandise, including marijuana paraphernalia.

The law says you can only discharge your gun at a human being unless you believe your life is in imminent danger? According to the police, the robbers were busy grabbing drug paraphernalia off the shelves when Sunna shot at them. But could one argue, after all the clerks shot and killed in the news over the last year, the act of 3 masked men bursting into a retail store, did in itself poses an imminent threat to the clerk? But liberals insist that the bad guys need to be aiming their gun at you before you shot them. This is the same kind of liberal crap we’ve seen on the battlefield in which several soldiers have been prosecuted for murder by the Obama administration for killing bad guys in Afghanistan. I would argue certain situations in of themselves pose a lethal threat. I would argue if you burst in and rob a store with masks on you pose a lethal threat and force is justified in repelling the threat.

Of course the other news outlets here have posted pictures of the masked robber killed as a sweet young man. But there is still no confirmation if he had any gang affiliations.

I do not agree with the Police in this matter who arrested Sunna for his split second decision. His fear was justified. He didn’t know what the three masked men intended to do next. But he did walk out of the store alive and the robber is dead. So he made the decision that saved his life from his perspective.