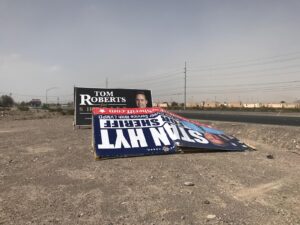 30 year Veteran Las Vegas Metropolitan Police Department (LVMPD) officer, (retired) Stan Hyt is running for Clark County Sheriff. As a regular guy, he’s not raking in tons of money from political special interests. He’s had to dig deep and fund his own campaign. So it really hurts when he sees his A-Frame signs vandalized. Stan sent 360 News the attached picture showing his A-Frame, which weights hundreds of pounds and, according to Stan, is anchored to the ground flipped over. Yet his opponent Tom Robert’s signs are untouched.

“I came into this race to serve my community.  Nowhere would my campaign message be one that would be counterproductive to anyone’s interest. I am running a positive campaign; there is no reason that I am the only one of the three of us that’s being targeted for sabotage.” 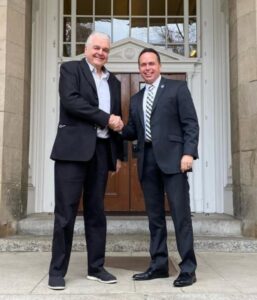 Tom Roberts is a juiced in politically connected extremely moderate Republican who supports Black Lives Matters and voted to raise taxes on the mining industry while serving in the State Assembly last year.

“As your next Sheriff, I promise to dedicate my time standing up for and defending your civil liberties. I’m a true patriot and love our police, military, citizens
—and our flag.”

Tom Roberts had no comment when he was called.