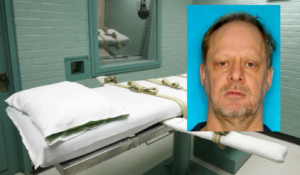 In the State of Nevada, no one has been executed in over a decade. Nevada’s last prisoner executed was Daryl Mack, by lethal injection, on April 26, 2006. Mack was executed for the rape and murder of Betty Jane May 1988. There are currently 83 prisoners on death row in Nevada. Edward Wilson has been sitting on death row the longest, since 1980.

Liberals have all but shut down the death penalty in Nevada blocking the purchase of lethal drugs necessary to execute condemned prisoners. They have created a lifelong appeals process intended on obstructing justice.

There is even a case in Nevada pending today where a two-time killer wants to die and the ACLU has filed motions to block his execution. Just this year the Democrats tried to end the death penalty in Nevada in the legislative session.

Yes, Stephen Paddock, who after allegedly killing 58 people committed suicide, but the very real question for policymakers is; should Paddock have been executed timely for his crimes?

The death penalty could be the deciding issue determining who wins key races like the Nevada Attorney General next year. And it could play out in down-ticket races as well. People in Nevada are hurt and angry over the Vegas Massacre and they are justified in wanting justice for all victims of brutal crimes in our state.