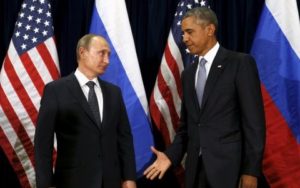 Mr. Obama’s legacy collapsed further in the Middle East this week as Russia and Iran defeated Obama’s backed rebels in Syria. So when the mainstream liberal media started pushing the Russian election hacking story, many people started pointing fingers at Obama. If the Russians did in fact hack the US election, then it most certainly should be seen as yet another failure of weakened US global power and a massive intelligence failure of the Obama administration.

The NSA, CIA and other intelligence agencies in the US government have consumed billions of US tax dollars every year for the past 15 years since 911 and have amassed more cyberpower over the last 8 years than ever seen in human history. So, the fact that President Obama failed to stop (allegedly) Russia’s multiple incursions into the US election just adds to an already failed foreign policy record of weakness which has invited foreign competitors to attack us at home. Remember it was Obama and Hillary Clinton who sold the American people the failed foreign policy of a reset button with Russia in 2008 after Putin invaded Georgia. It was Obama and Hillary who then fought Russia, Iran and Syria with US backed rebels only to suffer a devastating loss of the war this week.

Perhaps that’s why Obama broke this week from the Hillary camp by saying the hacking stopped after he spoke with Putin weeks before the election. Because the fact is, if the Russians did hack Hillary and the DNC’s email systems, exposing their corruption, it was all accomplished on Obama’s watch.

Or perhaps the Russian hacking story is just diversion from Obama’s massive and historic failure in Syria this week?