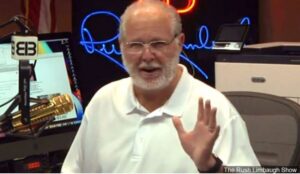 Rush Limbaugh exposes Dems’ true hateful hypocrisy in death as he did every day for 30 years on his number 1 talk radio show. For 30 years Rush took on the Dems, exposing their fake unity, fake compassion and their fake “liberalism”.

Just browse any FB Lib News page’s Rush Limbaugh passing away news story and the true face of the left is exposed. I say exposed because they claim to be the most compassionate folks on Earth. They label Conservatives as racist and hate fill

But compassionate people do not write that “they hope Rush burns in hell” or “I glad he’s dead”. This was a very common thread from the left showing joy over his death. For the left, its party first, humanity second.

Rush was a great man who raised millions for leukemia which is now 90% curable. Rush was a friend and companion for millions of people 3 hours a day. Without Rush Limbaugh Donald Trump would never have been President. Rush told the truth and Left hate him for that. They could not cancel him and death and the left won’t cancel his legacy either.