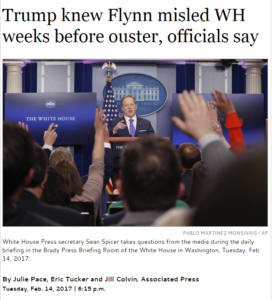 As FBI Director James Comey testifies today using very precise parsed wording and the Mainstream Media continues to attack President Trump’s ascertain that he and his people were wiretapped during the Obama Administration. Even our very own Las Vegas Sun News reported an AP story about secretly recorded Trump staff.

In the February 14 story, the AP reported “White House officials said they conducted a thorough review of Flynn’s interactions, including transcripts of calls secretly recorded by U.S. intelligence officials, but found nothing illegal.”

The secret recordings of General Flynn occurred in December 2017 when President Obama was in office before Trump was inaugurated. This, along with many other stories the mainstream media reported last year highlighted and quoted from secret recording they now want to say never happened.

The mainstream media is acting like the husband caught in bed with another woman having an affair by his wife and now demanding she believe him and not her eyes. The American people have seen enough.