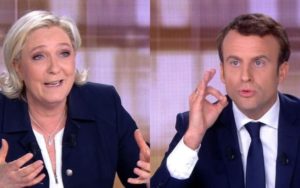 Just a few days ago, pro EU candidate, Emmanuel Macron was elected President of France. A banker with no political experience or record came out of nowhere to win the runoff election against nationalist, anti EU candidate, Marine Le Pen. Macron won with 66% of the vote to Pen’s 34%. But when one drills down into the numbers and the current demographic makeup of France, one can see that Macron was helped immensely by immigrants who only recently flowed into France.

Over the past 15 years, France has opened its doors to immigrants from Sub-Saharan Africa. France has a total population of 64 Million people. According to reports, in 2008, it was reported that 11.8 million foreign born immigrants and their immediate descendants were residents in the country; a figure which accounted for around 19% of the total population of the time. Godless, childless liberalism has led to a huge drop in populations across Europe creating a demographic crater. The lack of assimilation by the immigrants has created a political gulf liberals are exploiting at the polls. The majority of Macron’s votes came from the cities while the rural areas supported Le Pen more.

One can see clearly, that non-French born citizens played a significant role in Macron’s victory. Clearly Marcon would have still beat Le Pen, but the race would have been far closer without the massive number of immigrant voters.

– November 13 2015: IS jihadists armed with assault rifles and explosives strike outside a France-Germany football match at the national stadium, Paris cafes, and the Bataclan concert hall in a coordinated assault that leaves 130 people dead and more than 350 wounded, the deadliest attack of its kind in French history.

July 14, 2016: A truck ploughs through a crowd on Nice’s Promenade des Anglais after a Bastille Day fireworks display, killing 84 people and injuring over 330. The driver, Mohamed Lahouaiej Bouhlel, 31, is shot dead by security forces. IS claims responsibility.

France has suffered several mass terrorist attacks over the past year, all attributed to recent Muslim immigrants. So, immigration was a central issue in the French election this year. Marine Le Pen advocated “rebuilding” borders by limiting immigration flows. Le Pen wanted to reduce immigration to about 10,000 entries per year – compared to the 229,000 immigrants in 2012 – and wanted to remove the right to French citizenship through marriage or family links for any immigrants, effectively closing the French borders.

Liberals have been proponents of mass immigration here in the US and Europe not out of the goodness of their hearts but to overwhelm the local citizens at the polls. The French election is a model for how liberals plan to govern and hold power for the foreseeable future here in America and around the world. Liberals have been very careful about which immigrants they select. Asian and Eastern Europeans tend to be far more Republican than Middle Eastern and South Americans, who tend to vote more for Democrats.

This is why we see the ACLU try to empower prospective immigrants with Due Process Rights, so President Trump cannot block them from entering the US. The ACLU is arguing in Federal court that a man sitting in a cave in Afghanistan has due process rights to apply and enter the U.S. under the U.S. Constitution.

In 2016, in the general election in Nevada, immigrants made a huge impact on the outcome of our local elections but giving Democrats a huge victory taking back the State Assembly and State Senate in a sweep not seen since 2014 when Republicans swept into power.

According to Pew, The Hispanic population in Nevada is the 14th largest in the nation. About 789,000Hispanics reside in Nevada, 1.4% of all Hispanics in the United States. Nevada’s population is 28% Hispanic, the fifth largest Hispanic statewide population share nationally.

But according to the Hill: Registration is a game-changer with Hispanic voters. Only about 48 percent of eligible Hispanics vote, but nearly 80 percent of registered Hispanics go to the ballot box.

Nevada immigrant percentages are far bigger than France, so expect Nevada to continue to trend to the left unless Republicans can win over more immigrants. Republicans see an opening with Indian and Asian immigrants who are more focused on their own wealth creation rather than liberal ideals of income inequality. Asians in America are very pro-family, mostly Christian and many are small business owners. Asians excel in the U.S., from education to building businesses, so they are seen as a natural Republican voting block.

Currently the Democrats have a grown they voter registration lead this year, since the November general election from 88,818 to 91,911.