HELLER VOTED TO EXEMPT HIMSELF FROM OBAMACARE & TO GET RECEIVE HUGE GOV. SUBSIDIES

HELLER VOTED TO EXEMPT HIMSELF FROM OBAMACARE & TO RECEIVE HUGE GOV. SUBSIDIES 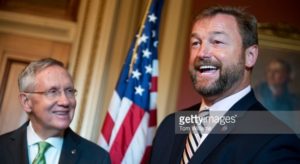 As the nation waits for the Republican Senate to keep its word and repeal Obamacare after promising for 7 years, it’s important to note that the U.S. Senate, including Sen. Heller, voted to exempt themselves from Obamacare. In fact, U.S. Senators declared themselves small business owners and vote themselves huge Government subsidies as outlined in the Daily Signal.

Rushing to enact the giant Obamacare bill in March 2010, Congress voted itself out of its own employer-sponsored health insurance coverage—the Federal Employees Health Benefits Program.

Section 1312(d)(3)(D) required members of Congress and staff to enroll in the new health insurance exchange system. But in pulling out of the Federal Employees Health Benefits Program, they also cut themselves off from their employer-based insurance contributions.

(It should be noted that, before final passage, Sen. Charles Grassley, R-Iowa, offered an amendment that would have provided Federal Employees Health Benefits Program subsidies for congressional enrollees in Obamacare, but Senate Democrats defeated it on a procedural vote, 56-43.)

Obamacare’s insurance subsidies for ordinary Americans are generous, but capped by income. No one with an annual income over $47,080 gets a subsidy. That’s well below typical Capitol Hill salaries. Members of Congress make $174,000 annually, and many on their staff have impressive, upper-middle-class paychecks.

Maybe the lawmakers didn’t understand what they were doing, but The New York Times’ perspicacious Robert Pear certainly did.

On April 12, 2010, Pear wryly wrote, “If they did not know exactly what they were doing to themselves, did lawmakers who wrote and passed the bill fully grasp the details of how it would influence the lives of other Americans?”

Act One—Congress Has a Panic Attack

Realizing what they had done, congressional leaders sought desperately to get fatter taxpayer subsidies in the Obamacare exchange system. In a nutshell, they wanted special funding unavailable to other Americans. The standard excuse was that, without a special “sweetener,” a Capitol Hill “brain drain” would ensue; the best and brightest would flee to the private sector to get more affordable employment-based coverage.

From 2010 to 2013, House and Senate leaders schemed to get extra taxpayer subsidies—past “the Tea Party rabble”—without a lot of noise, and secure a nice, quiet “administrative” remedy from the Obama administration.

Their hopes centered on a compliant Office of Personnel Management, the agency that administers the Federal Employees Health Benefits Program, providing the unauthorized relief. No recorded votes. No ugly floor fights.

Act Two—Congress Gets Taxpayers’ Money Without Appropriating It

Anticipating an attempted “end run” around the law, on Aug. 2, 2013, The Heritage Foundation published a detailed paper outlining the legislative history of the controversy. The analysis concluded that neither the Affordable Care Act nor Chapter 89 of Title V (the law governing the Federal Employees Health Benefits Program) authorized the transfer of monies in the Federal Employees Health Benefits Program trust fund for use in health plans outside of the program.

Shortly thereafter, on Aug. 13, 2013, Timothy Jost, professor of law at Washington and Lee University, wrote in his Health Affairs Blog:

The exchanges are only open to individuals and small employers. No large employers can participate in the exchange, at least not yet. There is no provision, therefore for large employers, including the largest—the United States government—to pay for exchange coverage.

Digging into the role of former House Speaker John Boehner, R-Ohio, and Senate Majority Leader Harry Reid, D-Nev., on Oct. 1, 2013, Politico reported, “OPM initially ruled that lawmakers and staffers couldn’t receive the subsidies once they went into the exchanges.”

But, at a July 31 closed-door meeting with Senate Democrats, President Barack Obama had promised he would “fix” the mess they made of their health coverage.

So, on Aug. 7, 2013, just as Congress was getting out of town for the August recess, the Office of Personnel Management ruled that members of Congress and staff enrolled in the exchange program would get Federal Employees Health Benefits Program subsidies, even though they were no longer in the program.

In a second iteration of its rule-making, the Office of Personnel Management declared that Congress and staff were eligible to enroll in the Washington, D.C., “SHOP” Exchange, a health insurance exchange reserved for small businesses with fewer than 50 employees. The exchange offers special insurance subsidies to participating small businesses.

The problem was, of course, that Congress is not a “small business,” at least under any clinically sane definition of the term, and no section of the Affordable Care Act provided for any congressional exemption from the ban on large employer participation in the SHOP exchanges. It’s hard to imagine a more arbitrary ruling.

In filing to get the special insurance subsidies for enrolling lawmakers and their staff members in the D.C. “SHOP” Exchange, congressional officials claimed that the Senate and House each had only 45 employees. That false information allowed both chambers to meet the magic number requirement.

In Feb. 2015, Sen. David Vitter, R-La., a member of the Senate’s Small Business and Entrepreneurship Committee, attempted to subpoena these un-redacted documents, only to be stymied by all nine committee Democrats and five Republicans.

According to National Review, Vitter’s effort was opposed by the Senate leadership. As for the five committee Republicans, they alibied their votes with excuses that ranged from the merely lame to the transparently absurd.

Now the issue is simmering again. This month, Michael Cannon of the CATO Institute and John Malcolm, director of The Heritage Foundation’s Meese Center for Legal and Judicial Studies, wrote in The Hill:

Documents obtained under the Freedom of Information Act show that unnamed officials who administer benefits for Congress made clearly false statements when they applied to have the House and Senate participate in D.C.’s ‘SHOP’ Exchange for 2014. Notably, they claimed the 435-member House had only 45 members and 45 staffers, while the 100-member Senate had only 45 employees total. Rather than a good faith clerical error, this was an intentional falsehood, which makes it a crime under both federal and D.C. law.

Nicholas Bagley, professor of law at the University of Michigan, says that Malcolm and Cannon’s charge is “irresponsible.” He insists that the Office of Personnel Management’s rule-making legitimizes these bizarre congressional gymnastics. But Bagley’s argument merely assumes what is to be proven. It is the Office of Personnel Management’s behavior, in the first place, that is at issue.

A serious congressional investigation would determine whether or not office’s career staff had indeed determined that the agency could not authorize subsidies outside of the Federal Employees Health Benefits Program.

It would reveal whether or not they were coerced into ruling contrary to their understanding of the law, and who specifically was pressuring them. Of course, such an investigation would secure all relevant Office of Personnel Management documents, including memos, meeting notes, emails, or other communications, especially from the White House.

Congress has options. Congress could, for example, admit that it isn’t a “small business” after all, and re-enroll in the Obamacare health insurance exchange system on the same terms and conditions as every other American participating in the system.

Alternatively, Congress could resurrect the original Grassley amendment, enacting Federal Employees Health Benefits Program subsidies outright, giving them statutory legitimacy, while enrolling the president, cabinet officials, and all political appointees in Obamacare. That, at least, would be constitutional.

Or, Congress could repeal Section 1312(d)(3)(D) and re-enroll members and staff in the Federal Employees Health Benefits Program. This would enable them, as the president initially promised all Americans, to keep the plans they had and they liked. But it has a public relations downside.

Lawmakers can pursue any of these options right away. The best option will take some time. It’s a matter of Congress cleaning up its own self-made mess, and a lot of others, by repealing the Affordable Care Act altogether.