GOV. CUOMO IS A DISASTER & FRANKLY SO WAS SEN. CRUZ THIS WEEK

GOV. CUOMO IS A DISASTER & FRANKLY SO WAS SEN. CRUZ THIS WEEK 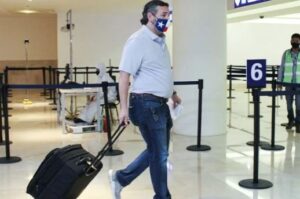 The problem with many of our people is, we defend our own people when they screw up just because they are OUR people. I had a friend stuck at hotel in Austin Texas without food. Nothing was open. The Government at every level completely failed in Texas. No police, no Red Cross, no national guard, no food, no power and no help. Sen. Cruz could have been on TV in D.C. repeatedly calling out Pres. Biden for failing to help Texas. He could have called the director of FEMA and demanded action. Cruz should have worked with Gov. Abbott to restore services and coordinated Federal resources. The fact is Cruz failed his test of leadership.

New York Governor Cuomo is a disaster and frankly this week so was Sen. Cruz. Every Army Basic trainee learns day one, there is no excuse for bad behavior. Sen. Cruz wasn’t just some guy taking his kids away from the cold misery of Texas’ once in 100 year cold storm. He is the Senator and Representative of the people of Texas in the Federal Government.

Maybe he might make a good Supreme Court Justice one day, but he lacks the leadership skills our Nation and the State of Texas badly needs. Being a quick witted fast talking lawyer doesn’t equal leadership.

President Trump repeatedly went to disaster areas and led the efforts to help those in need. Cruz went to Cancun. Cruz disqualified himself for President.