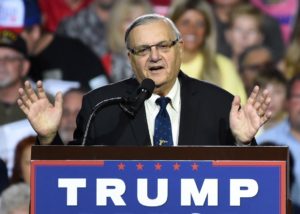 In February, The Clark County GOP announced that Sheriff Joe Arpaio would be giving the keynote address at their annual convention this year on May 5, 2018. The location was yet to be announced yet.

Sheriff Arpaio is running against Arizona Senator Jeff Flake after President Trump pardon him for enforcing immigration laws in his border town in violation of a federal Court order.

And that was the rub. No major venue would allow Sheriff Arpaio to speak at the GOP event without a major Police presence. According to inside sources, The Clark County GOP could not afford the bond required to host Sheriff Arpaio and so they were forced to scrub his appearance.