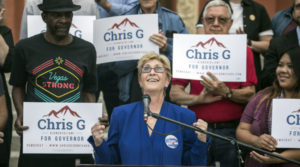 As we role towards November elections, it’s becoming ever more clear that whoever wins the Governor’s race may determine the future of 2A rights here in Nevada. Most Republicans feel pretty safe with either a Governor Laxalt or even Independent Candidate Governor Bundy. But Governor Sisolak’s sharp left turn in the Democratic Primary against far left Bernie Sanders supporter Chris Giunchigliani against the 2nd Amendment is alarming many average voters who care deeply about 2A civil liberties.

Both Chris G and Sisolak are running hard on a hard left anti-gun platform bent on seizing semi-automatic rifles today. All we have to do is look to California for the Nevada Dem’s gun control wet dream wish list.

1 year from now, whoever wins this November, will be governing over a most likely Democratic Controlled Nevada State House, perhaps with a veto proof majority. Which means Dems could pass California style gun control even with Laxalt or Bundy in the Governor’s Mansion. So if Republicans truly want to protect the 2nd Amendment in Nevada they must fight for every State Senate and Assembly Seat throughout the state.

Republicans must control one body of the State house as insurance. If the Republicans can win a majority in either the Assembly or Senate, all gun control legislation is dead and our rights are preserved for another 2 years.  The NV GOP has been working hard for the past year registering new voters and building their base back up by registering voters. But Dems right now have the historical edge on GOTV (get out the vote) and their Anti-Trump energy should worry Republican State leaders.

Let’s hope that fears of losing 2A rights and Dems impeaching Trump, if they take back the House in Congress, motivate enough Republicans in Nevada, who feel pretty good right now about the direction of the country under President Trump, to get out and vote this fall.

But let me issue this warning to Dems. If you succeed in passing any laws that restriction 2nd Amendment rights there will be a full force snap back in Nevada that may have the 2014 election looking like a Sunday day walk in the park. You will awaken every Republican in the State and the 2020 elections will be a Democratic blood bath.