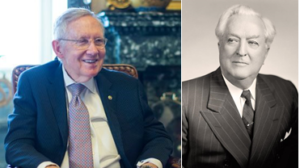 Carson City, Democrats in the Nevada State Senate, lead by Senator Tick Segerblom, FAILED this week to change McCarran Airport to Harry Reid Las Vegas Airport. Senate Bill 174, went down in defeat this legislative session after Sen. Segerblom was caught lying about the funding source for the bill to the media.  Segerblom claimed private donations would fund the $2.1 Million cost to change all the signs at the Airport, but the fiscal note in the bill sticking Clark County Taxpayers with the cost was never actually removed from the bill. 306Daily.net was the first to report the high cost of changing the name the day before the bill was heard in the Senate Committee.

After Harry Reid was in the U.S. Senate for thirty years, only two actual citizens showed up to the committee hearing to support the name change. Sen. Reid and his allies lead a smear campaign of Sen. McCarran in an effort to justify stealing his legacy. Sen. McCarran was a true leader here in Nevada and the people in his day respected and elected him over and over to a host of different offices over some 50 years. McCarran was a JKF type anti-communist Democrat and stood for everything Harry Reid stands against.